Eleven Madison Park's Granola Recipe Will Knock Your Birkenstocks Off 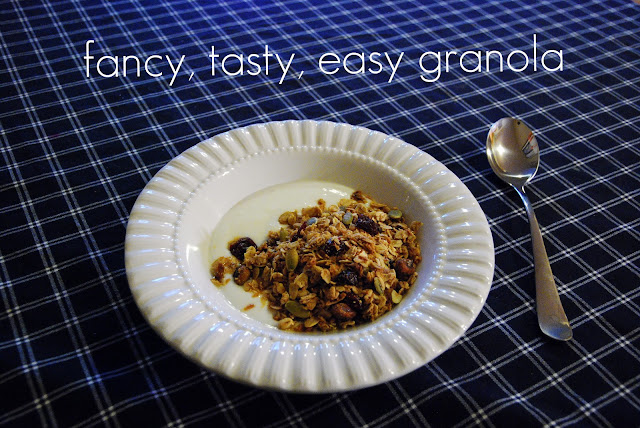 I wouldn't usually describe any granola as fancy.  I mean, granola is sort of the opposite of fancy:  you throw a bunch of ingredients together with maple syrup or honey and toast it up.  That's not very fancy.  But there's, something about Eleven Madison Park restaurant's granola recipe, which I first read about in The New York Times in October, that makes it fancy.

The granola may feel fancy to me because of the combination of ingredients, which I wouldn't have come up with myself.  This is the kind of granola where you eat it and you're sort of surprised it came out of your own kitchen.  It feels like something you paid too much for at Dean and Deluca.

Apparently, the upscale restaurant gives a small jar of this granola to diners at the end of their meals.  I don't remember them doing that when I went there several years ago, but what a cute idea.

More about the ingredients and the one thing I have changed to the recipe after making it four times after the jump!


I've played around with other granola recipes, but I never would have thought to combine pumpkin seeds, pistachio nuts, coconut, dried sour cherries, maple syrup and olive oil.  It's a great mix.  I wasn't able to find dried sour cherries, but I got dried regular cherries...close enough, I guess.  I've also used dried cranberries as a substitute.

Here are the steps! 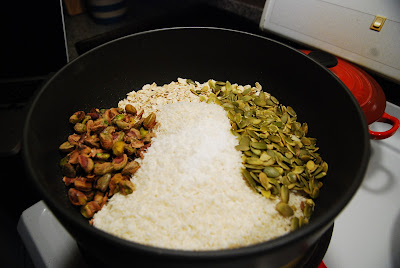 2.  Warm the maple syrup, olive oil and sugar in a small pot.  When the sugar is melted, you can take the pot off the stove. 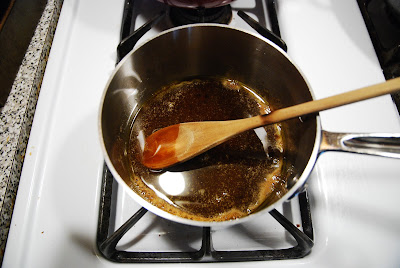 3.  Pour the maple syrup mixture over the dry ingredients and combine well.  Spread that mix onto a baking sheet that has a lip on it.  Put it in the oven for 30 minutes.  Oh, mix the granola around once in a while so it toasts evenly. 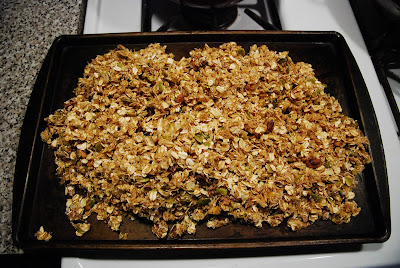 4. Put the granola into a bowl, add the dried cherries or cranberries, (taste the granola and be like, wow), then let it all cool down before you store it. 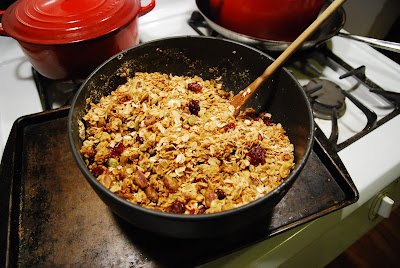 I love this granola and it's become something I like to have around for quick breakfasts (with yogurt).  If my rave review isn't enough, just google Eleven Madison Park and granola.  I just did that and saw that there were lots of other people going bonkers over this stuff.