How to Spend an Afternoon in DUMBO, Brooklyn, With Your Baby or Kid 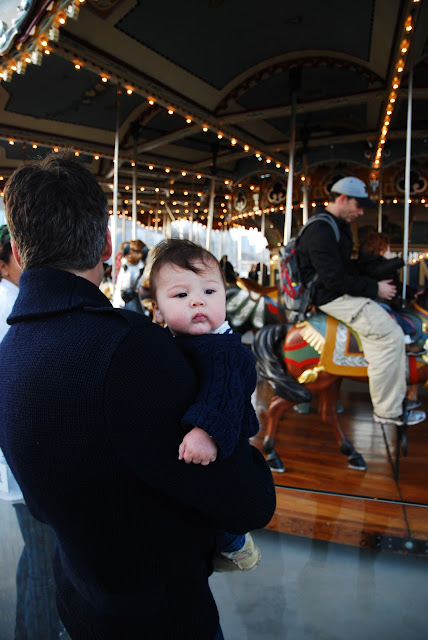 Before we went to Spain a couple of weeks ago with our five month-old baby, I looked for Spanish websites to learn about kids' stores, playgrounds, family-friendly restaurants and fun things to do with our baby while in Barcelona.  Since our baby is only five-months old, he's happy to just do whatever we're doing, but I like for him to see other babies and kids whenever possible.

I found a Barcelona-based parenting website called Mamaproof that had some posts in English.  I ended up reaching out to one of the bloggers to ask her for her tips for shopping for our baby in Barcelona and she kindly sent me a list of stores, many of which we visited and wouldn't have learned about on our own.  It was great that I found Mamaproof, but I was surprised I didn't find more sites like it.

That got me thinking about New York and Brooklyn.  Sure, there are tons of blogs about New York and tons of general parenting blogs, but I wish there were more sites about how to get the most out of New York City with kids.  There are calendars of events and you can cull through the sites and put together your own thing, but I like the idea of packages.

So, that was the idea behind today's post of how to spend an afternoon in D.U.M.B.O.  We went last weekend because we had a friend in town from Rio de Janeiro who had never been to Brooklyn and I wanted to check out the new carousel down there.  Maybe someone else who lives in New York and is reading this is also curious about the carousel or maybe someone in Barcelona wants to visit Brooklyn, but doesn't know what to do there.

D.U.M.B.O. is the name of a Brooklyn neighborhood whose letters stand for Down Under the Manhattan Bridge Overpass.  My husband used to live in D.U.M.B.O., which is great for visiting, but not the best for living because there aren't many amenities and restaurants.  Anyway, since it's only one stop out of Manhattan, it's easy to pop over and visit if you're curious about Brooklyn, but don't have that much time to explore the whole borough. 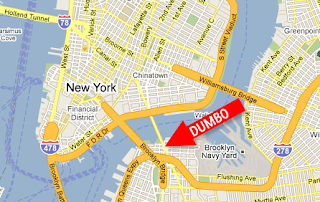 1.  Stroll around D.U.M.B.O. and check out its shops
There are some cute spots such as Spring Design, a design store and gallery, and Pomme, a children's shop, and Zoe for men's and women's clothes. 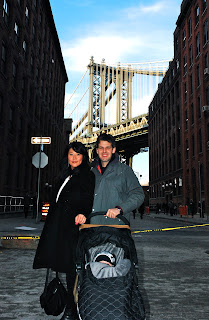 2.  Have brunch/lunch at Bubby's
Bubby's is a casual restaurant with basic American fare and lunch entrees that are about $15 on average.  I've probably been there about 10 times over the years, mostly because D.U.M.B.O. doesn't have that many restaurant options.  (My husband used to live there and that was one of his biggest complaints about living there.)  Bubby's food isn't amazing, but I've also never had a bad meal there either.   (They want to be a Southern style restaurant, but it's really not a place to get southern food...they don't know how to make grits.)  But, I appreciate the restaurant more now because it is really stroller-friendly and family-friendly.  When we were there last weekend, about half of the tables had babies at them.  There aren't many restaurants that have plenty of space for strollers, but this is one of them.

To get to Bubby's/D.U.M.B.O, take the F train to York Street or the A/C trains to High Street and walk 10 minutes from either station.

Oh, and while you're at Bubby's, take some pictures in their old-fashioned photo booth for $3.00!  The only real printed photo I have of my baby at this point is an extra passport photo.  Sad! 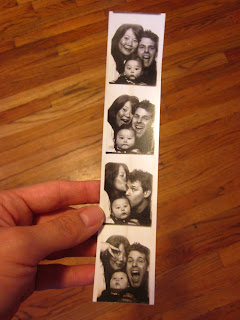 3.  Walk around Brooklyn Bridge Park
This is right next to Bubby's.  (You could also pack a picnic and have it there if the weather is nice.)

4.  Go to the new Jane's Carousel
My mother-in-law learned about this new carousel, which opened about three months ago, from the tv in the back of a cab when she came to visit us in October.  I was surprised I hadn't heard about it sooner, but I was deep in newborn mode all summer and not really part of the bigger world.

The beautiful carousel is in a mostly-glass housing designed by Jean Nouvel.  It's cool because most carousels are pretty dark, but because of the housing, this one is really open and a part of its surroundings.  Even without having a baby, I would have gone on the carousel, which was painstakingly restored from 1922.  It's a great addition to the waterfront in D.U.M.B.O.

The carousel is $2.00 per person (our baby didn't need to pay, so I'm not sure at what age you have to pay for the kids) and the ride is probably about two or three minutes long.  The horses on the outermost edge don't go up and down, but the others do. 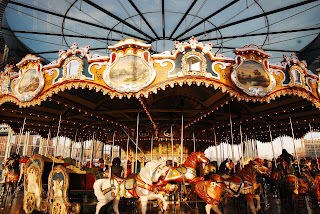 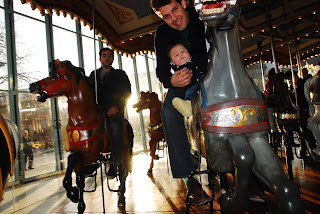 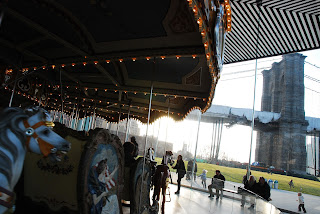 5.  Check out a playground
I haven't done this, but I plan to the next time we're in D.U.M.B.O. and the weather is nice.  Here are the playgrounds in Brooklyn Bridge Park.

6.  Get an ice cream at the Brooklyn Ice Cream Factory


7.  Walk across the Brooklyn Bridge, which is 1.1 miles or 1.8 kilometers, towards Manhattan 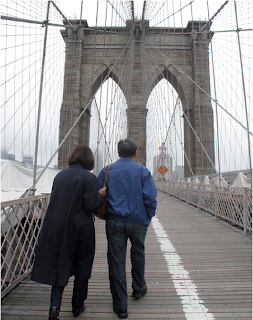