Sucking Out Baby Snot with My Mouth and Other Cold Remedies

As parents, my husband and I have done many things that were previously unimaginable, such as sucking snot of a nose.

Greyson got his first cold over Christmas while we were in California visiting family.  Who knows where he got it from since there were so many opportunities to get sick:  we were on a plane for 5 and 1/2 hours, my husband wasn't feeling well, we were around other sniffly babies and kids and there were many weather changes from New York to California.  We figured Greyson's first cold was going to happen at some point this winter, like a rite of passage...for him and for us.

The cold took about 10 days from start to finish; three really gnarly days in the middle that involved lots of crying and reduced sleeping and breathing, bookended with sniffly days that required a little extra comforting.  After much trial and error, we learned some lessons about baby colds.

The first lesson we learned is that these syringe bulb aspirators that they give you at the the hospital don't work well.   It is probably more useful as a turkey baster.  We found that the tip was too hard and pokey to be comfortable in Greyson's nose, especially as he thrashed around like a line-caught fish.
What was it like to suck out our baby's snot with our mouths?  Find out after the jump!

Here's are the six lessons we learned from handling our six-month old baby's first cold:

1.  Suck out the snot.  Greyson couldn't breathe, making nursing and sleeping difficult.  This created a cycle of sadness because with less sleep, he was crankier and not getting the rest he needed to get better.  It was hard for us to see him so sad and helpless and we realized that we needed to get the mucus out.

When the bulb syringe didn't work for us, it wasn't a hard decision to use our mouths.  We just turned our heads like we were going to take a bite out of a taco, created a seal with our lips around Greyson's nose and sucked.  We'd get a few drops of snot and spit it into a burp cloth.  It wasn't pretty, but it helped GP.  People have recommended the Nosefrida to us, but Greyson really hated anything near his nose, so even if it's great at getting snot out, I can't imagine it staying in his nose.  Not with how he whips his head back and forth.

2.  Humidify.  We have been using a humidifier in Greyson's room all winter, but we pumped it up to 10 on the three worst days of his cold.  One morning, we walked into his room and it was like a tropical rainforest from all the humidity.  It definitely helped because that night was the first night he had slept through the night in almost a week.

A friend also told me that she took her baby into the shower with her when her baby was sick and let the steam from the shower work its magic.  I will definitely try that next time just to have another remedy in the toolkit, but the humidifier worked for us. 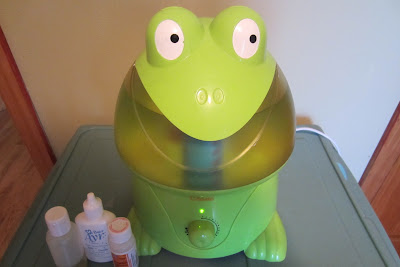 3.  Thin the snot out.  My mother-in-law got Baby Ayr for us even before we had our baby, saying that it is one of the only things you can really use when a baby gets a cold.  We used this after sucking out snot, to thin out whatever else was there.  It seemed to help him fall asleep, so we'd use it before naps and bedtime.

4.  Befriend infant ibuprofen.  For the first two days of the cold, we used baby Tylenol, but then my sister-in-law said that Tylenol never did anything for her and that she used baby Motrin (ibuprofen).  When we tried that, we noticed that Greyson seemed less fussy and more able to fall asleep.  We only used ibuprofen on the three really bad days, and only on the peak bad day did we use it three times (the bottle says you can use it up to four times in a 24-hour period and not to use it for more than 10 consecutive days.)

5.  Moisturize.  We used olive oil and sometimes aquaphor to keep the nose area moisturized.  When the snot got crusty, it would chafe the skin around Greyson's nose and make it red and irritated.  I found that keeping olive oil on his nose area, calmed his skin. 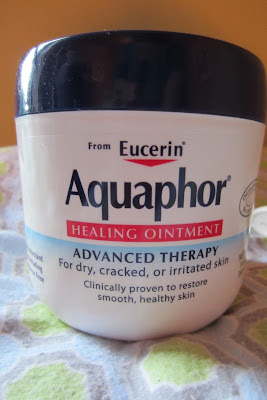 6.  Comfort.  We sleep-trained Greyson when he was 14 weeks old and had doubled his birth weight, so he's been sleeping 12 hours a night since then.  If he cries at night, he knows how to self-soothe and go back to sleep.  But when he got sick, we didn't let him cry it out.  On the days he couldn't breathe, I just nursed him and cleared his snot as often as he needed.  We comforted him as much as we could and held him a lot more.

Greyson's first cold was like a lot of other firsts we were nervous about (flying, for example), but the anticipation was worse than the reality.