Airline Food That Inspired Me to Cook at Home 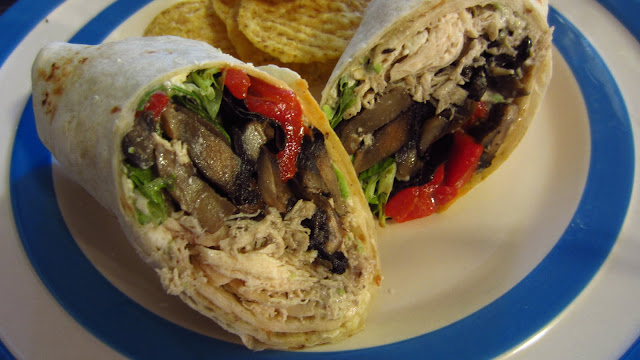 You will never catch me on a plane, train or automobile, without food.  I hate being hungry and I hate not being able to eat something good when I want to.  That means I pack snacks and/or meals when we travel or are going to be out and there's any question about when or where we're going to eat.

When we flew home from California, however, Rob was in charge of packing our food while I was packing our luggage.  Rob had a stomach ache and was sort of out of it, so he packed a lunch, but forgot that we'd on the plane for dinner time, too.  So, we bought something to eat on the plane, which is something I've never done.

We ordered a cheese plate, which was disappointing:  the cheese and grapes were all frozen and the crackers were all crumbled to dust.  We should have returned it, but we were too hungry.  We also ordered an edamame and portobello wrap, which was actually tasty and fresh.  What a surprise!  I said to Rob that I wanted to make something similar at home.

Airline food inspired me!  To learn how to make the Virgin Wrap, click on!

Here's what's in the wrap and how Virgin describes it:

I made my interpretation of this wrap twice.  I added some of my own ingredients:  shredded chicken, feta and pecans (since I didn't have walnuts).  The first time I made the wrap, it wasn't as good as Virgin America's wrap and the second time I made it, I made some modifications (added the mint, which I had forgot to buy for the first one, added mayo, added a good balsamic vinegar to the mushrooms).  The second time around, my wrap might have been better than Virgin's.  This recipe is something I'll add to my wrap repertoire.  Thanks, Virgin.

Here's my recipe: shredded chicken tossed with balsamic and olive oil, feta, roasted red peppers, portobello mushrooms sauteed in balsamic, shredded mint, arugula, edamame, pecans, mayo, olive oil.  (I used an immersion blender to crunch up the edamame, pecans, mayo and olive oil, which I spread across the wrap and all the other ingredients were piled up in the wrap.)  Oh, I had forgotten there was cucumber in the wrap, so I didn't use it, but I'd try it next time.