We Chose to Party And Ignore Our Baby's Sleep Schedule 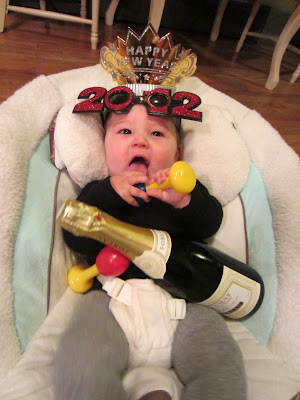 I usually take my baby's sleep very seriously.  Early on, I learned somewhere that babies grow while they're sleeping, so if Greyson wasn't sleeping a certain number of hours, I felt that I was depriving him of growth.  A little OCD?  Maybe.

So, when we got invited to a dinner party on New Year's Eve, my immediate thought was that we couldn't go.  We've never hired a babysitter and New Year's Eve is probably one of the hardest times to find one anyway.  But my friend said we should bring Greyson.  I brushed off the idea since Greyson has never not been home to be put to bed at 6 pm since we sleep trained him at 14 weeks (except for when we flew to Barcelona).  But Rob and I discussed the idea of going out for New Year's Eve after our Christmas trip to California.

After California, we realized that adjusting back to Greyson's sleep schedule when we travel is just a part of life.  It made us more open to the idea of going out with Greyson one night on New Year's Eve, probably one of a handful of nights a year that we would ever do that.  We decided to go to the dinner party.

We had many conversations trying to figure out how we were going to execute our night out.  Should we put Greyson to bed at 6 at home and transfer him into a car seat at 7:45, when we will get a car to go to our friend's house?  Will he stay asleep?  Will he wake up, be confused and wail?  We had no idea what to expect.

After the jump, I'll explain exactly how things went down, and why we're glad we partied with our baby on New Year's Eve. 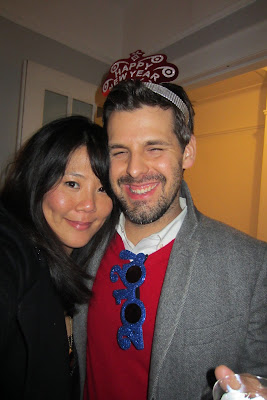 We probably just got lucky, but here's what we did:

1.  We did the regular bedtime routine at 6 pm.  After his bottle, Rob put Greyson down in the car seat, which was in the crib.  Greyson was clearly mystified by this, but we figured that the less transfers of the baby, the better.  He cried hard for about 30 minutes and finally fell asleep.  (Usually, he doesn't cry at all at bedtime.)  We weren't sure if he was going to fall asleep in the car seat, but he did.

2.  At 7:45 (Greyson had been asleep for about an hour at this point), we got into a car for a 10-minute ride to our friend's house.  We had covered the car seat in a muslin blanket and when I peeked under the blanket, I saw that Greyson's eyes were opening and closing.  He was confused, but sleepy enough where he didn't fully wake up.  Rob and I joked that he must be thinking he was having a very weird dream.

3.  We got to our friend's house and put Greyson in a guest room with the lights off.  We continued to be amazed that he stayed asleep through getting out of the car, closing the door, walking him down a sidewalk, etc.

4.   We enjoyed a lovely dinner and adult conversation! 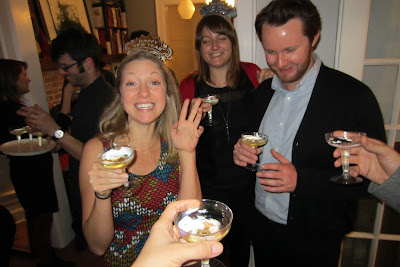 5.  Greyson woke up crying at 11 pm, at which point I fed him and put him back in the car seat and left the room.  He fell asleep right away, which was unbelievable.

6.  We left the party at 12:05 am (happy new year!!!) and Greyson continued to stay asleep, even as we passed fireworks that were going off in Prospect Park.


7.  We first put the car seat back in the crib, thinking why wake Greyson up.  But then, I realized he might be uncomfortable if he can't move around for about six more hours when he usually wakes up.  So, we transferred him to the crib.  Rob picked Greyson up and I moved the carseat out of the crib at the same time.  He stirred a little, but didn't wake up.

Wow, mission accomplished.  Rob and I high-fived each other and cheered silently in Greyson's dark room.  We would never actually want to make going out with Greyson a regular thing, but knowing we can do it once or twice a year max, is good to know.  We are big on finding ways to adjust our lives to still have fun and do it responsibly.  We never want to check out of life just because we're parents now.  We were able to find a solution that worked for us and for Greyson, so we were pretty excited.