Daytrip to Brasil from Brooklyn


Greyson and I went to Brasil for a day.  Well, we went to a Brasilian grocery store in Queens, which is about an hour away door-to-door by subway from Park Slope.  I've heard there are bigger and better Brasilian grocery stores in Newark, New Jersey, but that's too far away from us for a grocery trip since we don't have a car.

I love that in New York, you're just a train ride away from another country.  When Greyson is older, I think it will be so fun to make a day out of visiting ethnic neighborhoods, eating the foods, meeting people and discovering things about those cultures.

So, the motivation to trek out to Queens came to me after emailing my Brasilian mãe last week.  I remembered her delicious pão de queijo (cheese bread), which she made for me when I visited her family in Belo Horizonte in 2008.  When I got married in 2009, she sent me her recipe painted on a plate.  So cute and creative, right?  Well, I never made the bread!  I got all the ingredients back then, but I ate all the Brasilian cheese before I had a chance to make the dish! 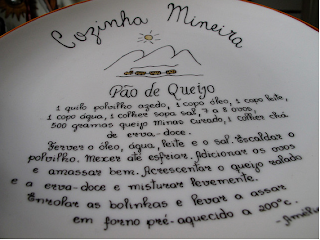 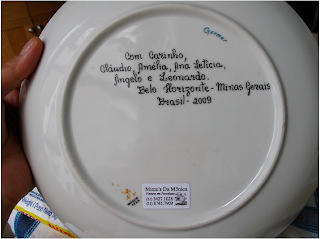 So, we went to Queens and got a ton of stuff.  These are all very common products that you can find all over Brasil:

Biscoito Polvilho:  Mandioca (yucca) flour crispy things
Amendoim Japonês:  Cruncy coated peanuts that are Japanese but adopted by Brasilians
Matte Leão tea:  I think Brasilian mate is much mellower than the Argentinean kind
Catupiry Requeijão: Brasilian cream cheese (not pictured)
Guaraná:  I don't love soda, but I get this for nostalgia
Prestígio Coconut Wafers:  I prefer the coconut-filled cookies, but they are hard to find even in Brasil
Serenata de Amor chocolates:  totally Brasilian chocolates
Pilão coffee:  I've never gotten the "Reserva" style of this brand, so I thought I'd try it
Reusable coffee filter:  They used one of these at the place I worked at in Brasil.  I thought it was gross because after you use it once, it looks like a dirty diaper, but it's another nostalgic thing for me.
Frozen purées of Açaí, Maracujá and Acerola for smoothies
Frozen pão de queijo:  Forno de Minas brand
Pão de queijo mix in a box (I want to do a taste test of homemade, frozen and box mix)
Polvilho Azevedo:  This is mandioca flour, which is used in the pão de queijo recipe
Cocado com maracujá:  I've never seen this brand Brasil Caipira, but this coconut passionfruit thing caught my eye.  It wasn't very good, though. 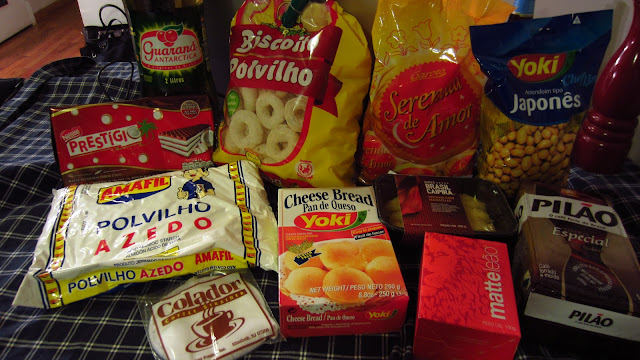 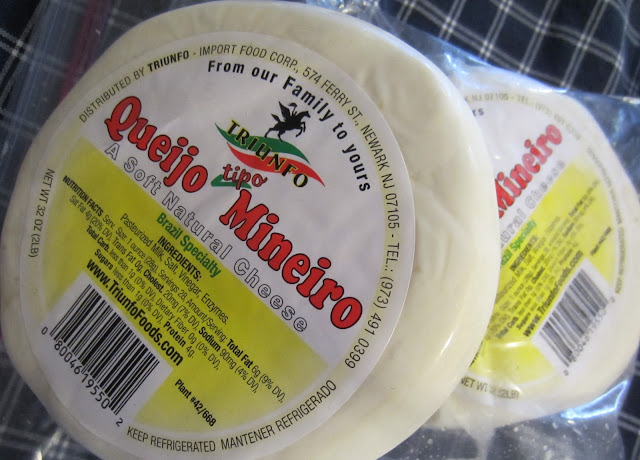 So, now I'm ready to make pão de queijo!  Let's see if this gringa can make an OK batch.

If you ever want to check out a Brasilian grocery store, Rio Bonito in Queens is easily accessible by subway.  Just get off N train at the 36th Street station in Astoria and walk two blocks!

We've been enjoying lots of Brasil lately.  My parents were in Brasil two weeks ago and they sent me some baby books written in Portuguese (see below).  I was so excited to read them to Greyson! 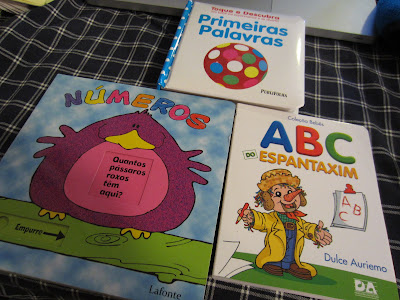 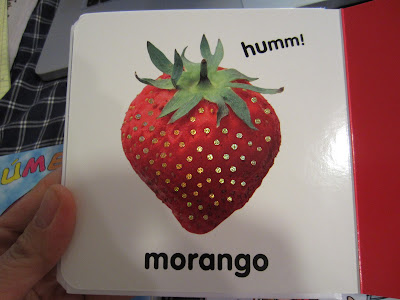