Is It Too Early to Teach My Baby Three Languages?

As parents, we all have our "things." One of Rob's thing for Greyson is to be musical and one of my things for Greyson is to be multilingual.  My first language was Korean, then English (at age 4-ish when we moved to the States from Seoul), then I took three years of French in high school and I've been learning Brasilian Portuguese for the past five years.  I love how language opens your ears, opens your mind to other cultures and opens up the world to you.  When you first understand or tell a funny story in another language other than your native tongue, it feels amazing!  It feels like unlocking a world, just using sounds, which are available to all of us!

I spoke Korean exclusively until I was around 4 years old, at which point I was taught English, which is what we spoke at home.  Over the years, I didn't pay much attention to Korean, but I went to Korean schools on weekends on and off for years and my parents sent me to a Korean language program in Seoul after finishing high school, so the language was always there in the background.  My understanding of the language is probably just barely at the advanced intermediate line, but speaking is harder for me.  What I'm glad about, though, is that I have a foundation in the language and a comfort with the language because it's always been around me.  Since I have that, I don't feel intimidated by the language and picking it up.

Here's audio of me talking to and singing to my Dad in Korean and English when I was 5.

And here's me singing to my baby in Korean, Brazilian Portuguese and English!

Aren't I going to confuse my baby with so many languages??  I address that topic after the jump.


Greyson has inspired me to pick up Korean again since I want him to learn it.  I also want to teach him Portuguese!  It's not so much that I so want him to speak Portuguese, per se, but I love that language, so it's going to be more fun to teach than, say, Spanish, which may be more useful, but I don't know it (yet).  It's like that phrase, "the best camera is the one you have with you." I have the Portuguese!  Also, for me, it's more about Greyson developing an interest in and comfort with languages in general, not necessarily becoming fluent in Portuguese and Korean.

People who aren't familiar with a child's ability to soak up languages at an early age often say that learning multiple languages is confusing.  I don't feel that way because I am the product of learning two languages at an early age, and so is my brother.  I recently heard that audio recording of me talking to my dad in Korean and English when I was 5 years old, a year after learning English.  I was effortlessly going back and forth between both languages.

I'm not saying it's going to be easy or that I even know how to teach Greyson three languages (one seems hard enough), but my plan is to be consistent and use every opportunity available to expose Greyson to all three languages.  We'll see what happens!

So, how have I been executing this mission so far?  Whenever I can, I'll often say the thing in all three languages all in the same way.  So, if I want a kiss from Greyson, I'll say...Give me a kiss!  Ppo Ppo joo say yo!  Me dá um beijo!  Besides sprinkling words and phrases here and there throughout the day, I also dedicate his meal times to either Korean or Portuguese and switch.  Sometimes (often) I resort to English if I don't know the word in one of the languages (I couldn't for the life of me remember what the word for carrot was in Korean today).  And other than that, I try to play Korean or Brasilian music in the background and when we watch videos online, I try to make it Korean or Portuguese.  Will this approach work?  I don't know!  I just try to give Greyson some Korean and some Portuguese daily and hope some of it sticks over time.

-I found two great (and free!) websites for me:
Talk to Me In Korean and Learn Korean

-A Korean language here and another online resource page here.

-My cousins in Korea sent me a bunch of Korean songs, which I try to play around the house daily

-Greyson's Tia Ana, of my Brasilian family in Minas Gerais, has sent me children's music, which I play daily (see picture below).  Greyson loves the song O Pato on the Arca de Noé CD.

-I reached out to Luciana Lage of Street Smart Brazil, a site that I like a lot for Portuguese lessons, asking if they could suggest some Portuguese language links for babies.  Luciana kindly sent me to some great sites:


-Also, I realized that Sonia-Portugese, another Portuguese site I've liked and used for a long time, has a kids section! 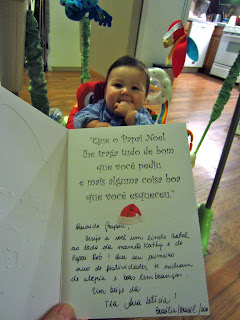 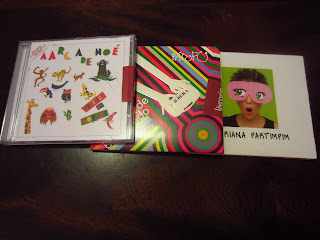 Technology has made language learning so easy, too.  There are so many resources.  You have to do some digging to find the right ones, but there is so much stuff online for any language you want to learn.

For both Korean and Portuguese I've Googled up a storm and found some language apps and kids songs and shows on YouTube.  Also, there are many parents who blog and share their experiences and resources for teaching their babies Korean, Portuguese and other languages.  One site leads to another.  For instance, this site called Bringing up Baby Bilingual had a ton of other multilingual-related links on its sidebar.  Also, Facebook just started translating some posts, so when I see a post from a Brasilian friend or Brasilian news outlet in Portuguese on my Facebook, I can read the text and see if I understand it and then click "translate" to check myself against it.  There's also websites like Lingro (love!), that can make any webpage like a dictionary so you can read in another language and click on any word to quickly see what it means in your native tongue (also the Lingro bar you can download for free is awesome).  I could go on...there's seriously so much out there.

I'm just starting out on this adventure.  There's no fixed plan or structure to this yet...but hopefully, it's one of those things that you figure out as you go along, trial and error style.  If you have any tips you'd like to share for introducing languages to babies, I'm all ears!  Obrigada!  Gamsa-hamnida!  Thank you!

I'll sign off with a video of Greyson when he was two months old.  We stumbled upon Raizes do Brasil practicing Capoeira in Prospect Park.  Greyson's introduction to Brasilian music and culture started very early on in his life!