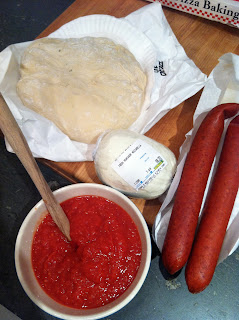 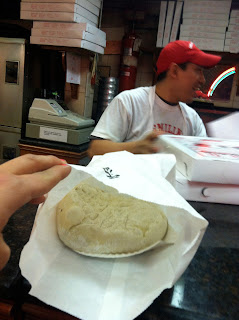 2.  Buy a can of Scalfani crushed tomatoes for about $1.99.  Adam recommended the quick recipe that appears on this page to me when I said I wanted something fast and good. The sauce is just Scalfani tomatoes, dried oregano, dried basil and garlic.  You probably have the herbs and garlic at home...this sauce couldn't be faster! 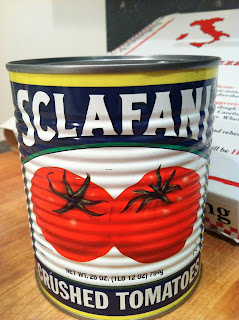 3.  Buy whatever toppings you like.  I got some fresh mozzarella and pepperoni.

4.  Roll out one of your dough balls while the oven is preheating to 500 degrees fahrenheit ( 260 degrees celsius) with your pizza stone in the oven.  (If you use a stone, that is)

5.  When the oven is ready, pull out the stone and put it on top of your oven, making sure it doesn't wobble around.  Put the rolled out dough on the stone and carefully shape it, making sure not to touch the stone.  Put the sauce and toppings on the dough that's on the hot pizza stone.  (I don't know if this is how you're "supposed to" do it, but it's how I do it.)  I realized after my pizzas were done that I put too much sauce and cheese, so my final pizzas were a little on the wet side.  Still good enough for me, but next time I'll remember Adam's tip:  "What looks like too little raw usually ends up being just enough. What looks like enough is often too much."


6.  Leave the pizzas in the oven for about 10-12 minutes or until crust is well browned.  I didn't leave my first pizza in long enough, but I got it right the second time.

7.  Let the pizzas rest for a few minutes (they are way too hot right out of the oven), slice and enjoy! 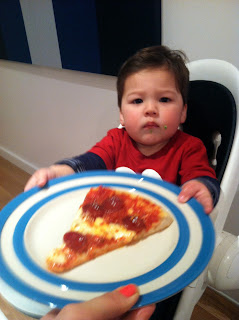 In the end, you will have made a good pizza with very little effort and clean up.  I'm excited to work on this lazy man's pizza and get it down to where it's lightning fast and really good.
Posted by Kathy at 6:21 PM