I had never heard of Smitten Kitchen until the blogger's cookbook came out a few months ago.  It turns out I've been missing out on some great food blogginess!

I have never pickled anything before and now I'm thinking it's an area that I really need to explore. 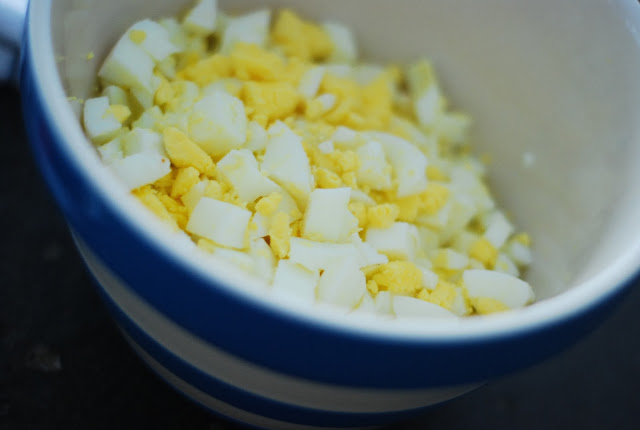 As I was eating and loving my sandwich, I was trying to think of where else I could put the zingy, crispy pickled celery.  I had made extra, as the recipe instructed, thinking that maybe I'd add the celery to some other kinds of sandwiches.  But, there was none left over because my husband and I were topping the egg salad sandwiches that already had pickled celery in it, with even more pickled celery.  Mounds of it.  Glad I made the recipe with a third celery stalk just to top the egg salad with.  I couldn't get enough of the stuff.

I made some adjustments to the recipe since I didn't have everything the recipe called for in my pantry.  Instead of whole grain dijon, I used Gulden's Spicy Brown Mustard (I had Maille Dijon and French's Yellow and for whatever reason, went with Gulden's).  I also didn't have white wine vinegar, so I just used white vinegar.  I liked how my egg salad turned out, but I'll definitely try the recipe with the whole grain mustard and white wine vinegar at some point.

The biggest thing about the recipe, though, is pickled celery!  It's going to be a part of my life now.  Thank you, Smitten Kitchen for enhancing my life with this bit of pickled heaven.

Here's Smitten Kitchen's recipe as reprinted from her site:

Egg Salad with Pickled Celery and Coarse Dijon
As I learned here, there are about as many ways to hard-boiled eggs as there are people who make them. If you’re looking for a new technique, you will delight in the comments. Here, I use my approach, the one that works for me every time. If you rest the eggs in the fridge for a day or so after cooking them, they’re usually easier to peel while keeping the eggs intact. (Although mine, three days old, still were not. Punks.) If you’re not into mayo (I know you’re not, even if I don’t agree), you can use plain Greek yogurt instead. I have you make more celery than you’ll need because trust me, it will get used, as it’s great in everything from tuna to potato salads.
1/4 cup white wine vinegar
1/4 cup water
2 teaspoons Kosher salt
1 1/2 teaspoons granulated sugar
2 stalks celery, trimmed, diced tiny
4 large eggs
1 heaped teaspoon whole-grain Dijon
2 teaspoons minced shallot or red onion (or more to taste)
2 tablespoons mayonnaise or full-fat plain yogurt
Salt and freshly ground pepper to taste
Chopped flat-leaf parsley or fresh dill (to garnish, optional)
Pickle your celery: Combine vinegar, water, Kosher salt and sugar in a jar and shake it until the salt and sugar dissolve. Add diced celery to jar, cover it and place in the fridge for at least 30 minutes, ideally one hour and up to one week.
Cook your eggs: Place eggs in a saucepan and cover with an inch of cold water. Bring to a boil over high heat, and once boiling, reduce the heat to medium and set your timer for 10 minutes (for perfectly cooked through eggs), or 9 minutes (if you like them just-barely-set in the center, like mine above). Once the timer rings, drain eggs and rinse under cold water to stop cooking. To quickly chill them so you can use them right away, cover them in ice water for 10 to 15 minutes.
Make your salad: Peel your eggs and chop them, placing them in a medium bowl. Add 1 heaped tablespoon of pickled celery (more to taste), Dijon, shallot, mayo, salt and pepper and mix. Season to taste with salt and pepper. Serve on toasted whole grain bread, garnished with fresh herbs.
Posted by Kathy at 4:33 PM