When I saw these silicone push pop molds at a Cook's Companion in Brooklyn Heights, I thought they might be a good solution for times I want a break from the ice cream truck on the playgrounds.  We have regular popsicle molds at home, but I thought the push pop style (vs. the traditional popsicle style) might be less messy for Greyson and more portable.  The molds also reminded me of the old Push Ups ice creams that I used to love.  The salesperson at the store said that the feedback on the molds has been great and that people love them, so I bought four molds at $3 each on a whim.

I made a batch of pops by adding greek yogurt and sugar to smoothie leftovers we had for breakfast one day.  Then I put the molds through a rigorous stroller and playground test.


Here's what happened at the playground test.

The "ice cream" (spinach, mango, banana, açaí, yogurt and sugar) melted away just enough from the heat of my hand, so that Greyson could push it up out of the mold.  He got the concept right away and was just stoked that he got ice cream.  I let him hold it in the stroller.  We made it to the playground without launching the ice cream out of the mold or having smoothie drip all over the stroller.

Once we were at the playground, I let Greyson run around with the pop.  He would take a bite, run around, repeat.  A regular popsicle would have been dripping everywhere, but the mold contained the melted smoothie and then Greyson would drink that along with eating the remaining solid frozen part.

Greyson tipped the mold over once when he was on the slide, but I was sort of amazed that only happened once.  It's not the fault of the mold, though...a 22 month old can't really hold stuff steady while running around.  At that point, we sat down on the bench as I concluded the scientific playground test.

I think we're going to get a lot of use out of these molds this summer.  I looked at the Amazon reviews out of curiosity and got some ideas.  One woman says she freezes half apple sauce and half yogurt in them.  Another person said they just put regular yogurt in the molds and doesn't freeze it, so it's like a gogurt.  I also found a bunch of popsicle recipes online that I'm excited to try.  There were some old reviews that mentioned that the molds start to smell of funk after a while, which repulsed me.  But then a reviewer said that the company had fixed the smell issue, so hopefully that's true. 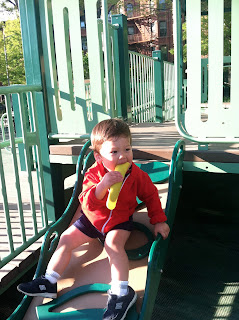 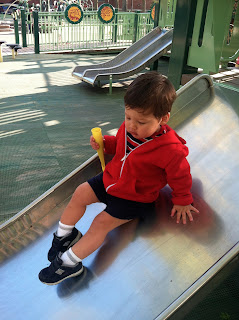 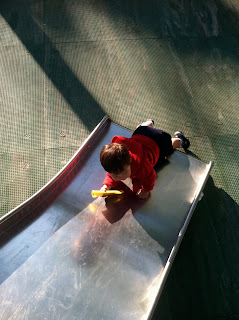 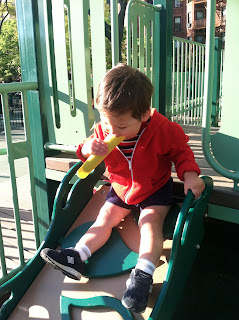 Salt and Pepa's here, and we're in effect
Want you to push it, babe
Coolin' by day then at night working up a sweat
C'mon girls, let's go show the guys that we know
How to become number one in a hot party show
Now push it