Never Wonder Where The Bus is Again: MTA Bus Time is The Right Time 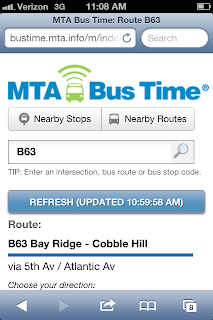 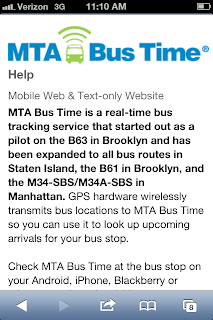 Oh, yes.  I never have to wonder if the bus near my apartment is going to come at all, if I just missed a bus by a minute or if I'd be better of taking the subway.

When I was going from Park Slope to the Brooklyn Bridge Park the other day, I wondered if the bus was on its regular schedule.  Last weekend, there had been a street fair near us. I don't know how people know how bus routes are re-reouted in those situations.  That's what I was thinking about when I had been waiting a while for a bus.  I decided to google the B63 bus status and that's when I learned about Bus Time, a web-based bus tracker.  It's something that New York should have had ages ago, but it looks like they just started it because only a few routes are on the program.  (The available routes are here.)

Bus Time allows you to track certain bus routes and see where the buses are.  This is an exciting development in a land where you never really know when or if the bus/train is coming.

And it was even cool to see while I was on the bus, how many more stops I had left before Brooklyn Bridge Park since Rob was meeting me there. 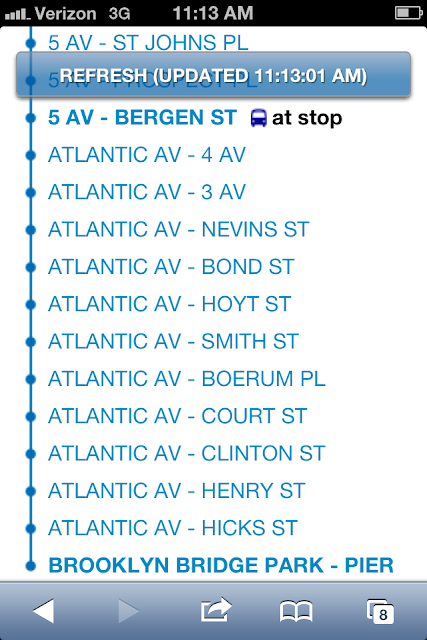 Unlike Paris, where all the subway and bus stops have show the times for the next two subways or buses (and doesn't require you to go online for the information), New York is just beginning to explore the world of sharing transportation information.  I know, since I love Paris so much, I should marry it.