America, The Beautiful! A Kid's Room Map That Serves as Decor, Learning Tool and Travel Journal 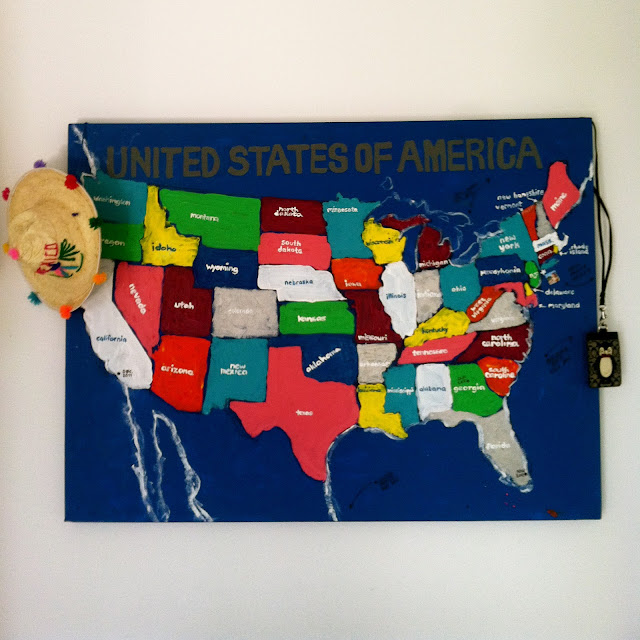 We didn't have a nursery set up for Greyson because we moved apartments 10 days after Greyson was born.  That was fun.

I would never choose to move at such a crazy time again, but living without all the baby stuff in place before Greyson's birth did make me realize that newborns really don't need that much stuff and it's sort of fun to figure out the baby's room after their born, rather than before.  That way, you're decorating with a sense of the baby's personality and what they might respond to. 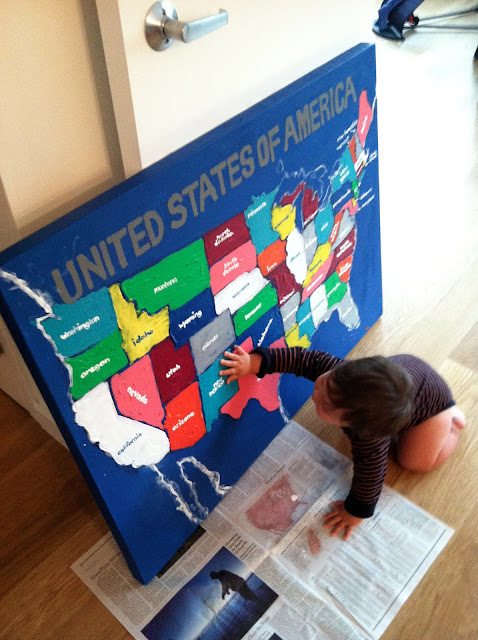 I always liked maps as decorations, but a post about decorating kid's rooms with maps we saw on Apartment Therapy prompted our idea for Greyson's room.  I'm pretty sure this was the post.  We liked the idea of putting a colorful map in Greyson's room, but we wanted to do it ourselves and we wanted it to be a record of his travels, too.  It'll be fun for Greyson to see all the places he's been when he grows up.  I want to fun things to help Greyson remember his trips and adventures.  I loved the below idea from designer Cynthia Rowley in a recent NYT magazine interview.


Q. Do you bring anything special for your kids?
A. For each big trip that we do, I buy journals, these little Pearl Paint ones that come in a pack, and markers and tape. My daughters can tape in things like exotic bird feathers, maps from the guides, pressed flowers or, like for this trip, a wildebeest hair. I write on the front their names, the date, the destination. The ones from Kenya and Tanzania are still circulating show-and-tell; eventually they’ll go on their bookshelves with the others.


We made Greyson's map a year ago, and we're still very happy with it as room decor, but also as a learning and memory tool.  Greyson knows about 10 of the states and we use the map to talk about where we've gone and where we're going.  It helps that the map is above his changing table, so he constantly looking at it.

Here's video of Greyson, who turned 2 on July 1, interacting with the map in his room.  He knows several of the states, mostly the ones that are at his eye-level.  Ha!

Here's how we made the map! 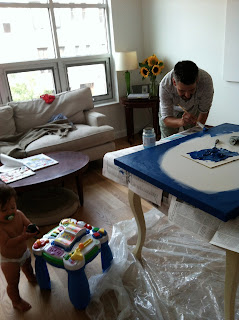 3.  Looked up maps of the US on Google and prepared a template.  We sketched out the states in Sharpie pen.  We did this and the rest of the painting in a messy way because we wanted the map to look imperfect, textured and a little rough. 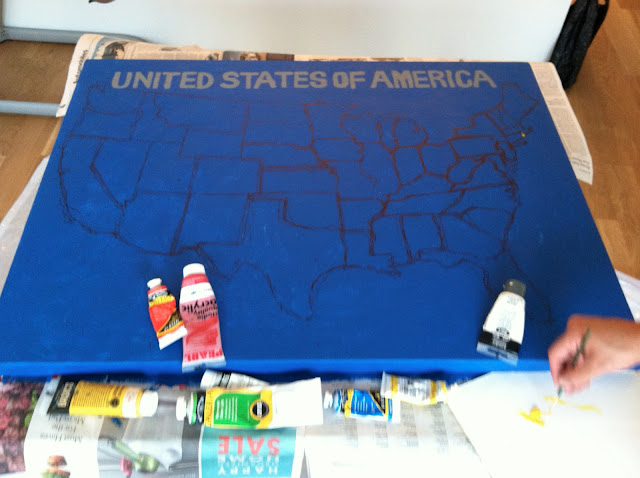 4.  Mapped out the colors we wanted to paint the states by putting down dots of paint 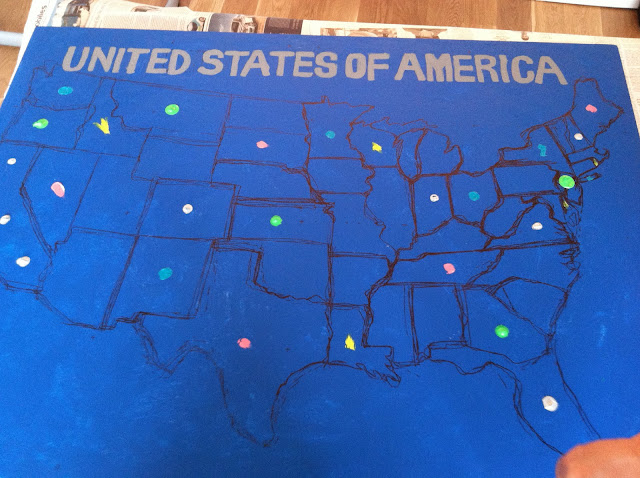 5.  Painted the names of the states in white or blue, depending on how dark or light the state color was painted 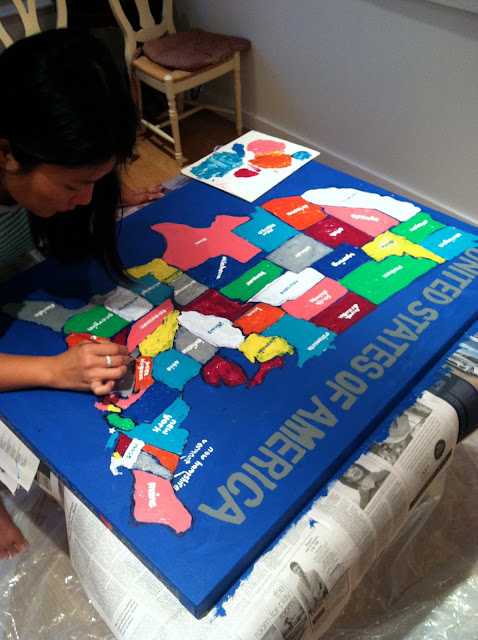 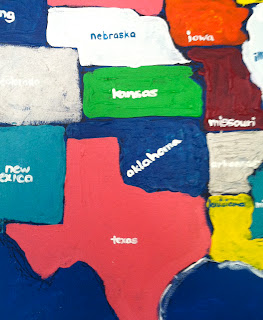 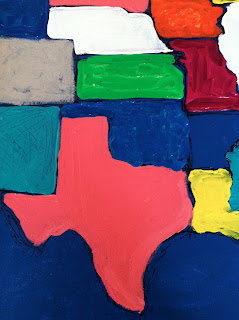 6.   Started sharpie-ing in the places we had visited 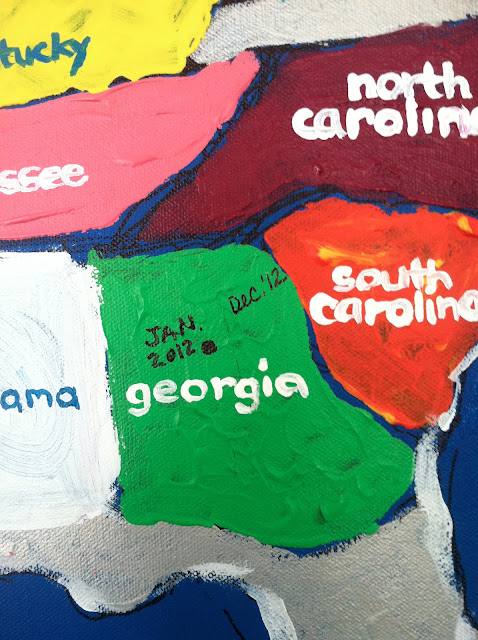 8.  We decided to write in the international destinations with arrows in the background of the map 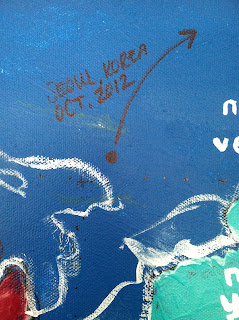 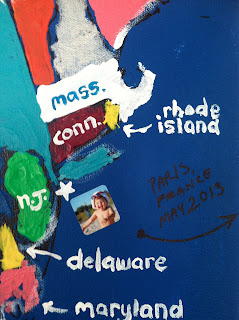 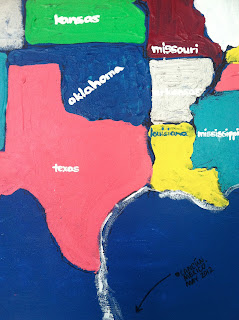 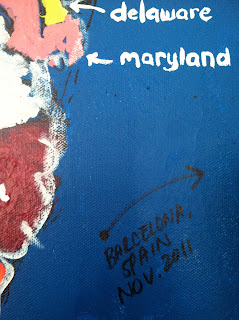 Maybe we'll do a world map version for our daughter.  She should probably have her own version!